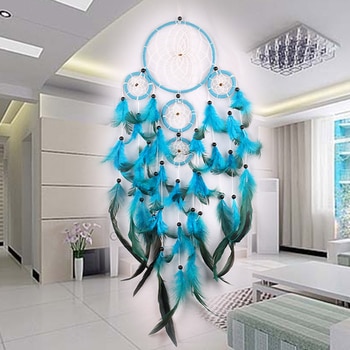 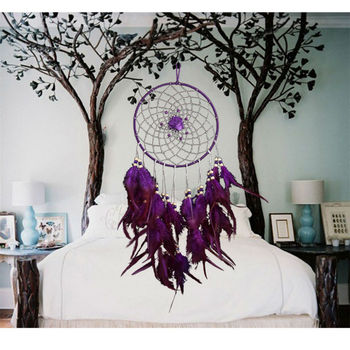 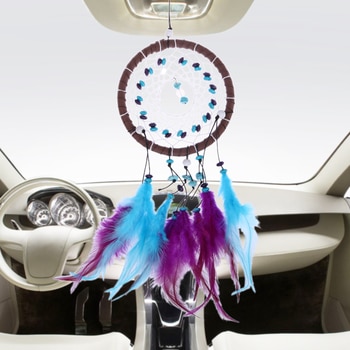 ✔️ An amazing gift for countless people in your life

✔️ Some dreamcatchers are small and cute; others are large and elaborate

✔️ All kinds of sizes and types are available, including LED dreamcatchers

What does it mean to have a purple dream catcher?

What is the purple meaning? What does it mean when any item or decorative object you have—including a lovely dreamcatcher from our website—is purple in color? Well, for one thing, the meaning that will be applied depends on the culture that you're using to consider the color. For example, we here in the West believe that the purple color is not only associated with girls and women, but also with calm, cool, and serenity. Purple in all its shades, whether dark or pale, is a calming color for us: it can easily be perceived as relaxing and serene, as a means of alleviating stress and helping us feel better about ourselves.

Another perception of purple in the West is that it combines this calmness, this serenity—which, it must needs be said, is often associated with blue—with the ferocity and the strength of red tones. This is because, of course, red—a constituent part of purple, along with blue—is a color associated with power, strength, and even anger. Together, the purple and the red form a color that is perceived not only as serene and strong but also as royal and powerful. Indeed, the purple color has long been perceived as associated with royalty, tied to wisdom, pride, and luxury. In fact, this connection with royalty is seen not only in the West but in different parts of the world as well. This tradition can trace itself back to the era of ancient Rome.

Purple is also linked to creativity, independence, peace, and even mystery. The mysterious aspect is aided by the fact that purple is a relatively rare color in nature; it is seen in some flowers and bird feathers, but that's about it. You can even see examples of this from the ancient world: Tyrian purple, a dark red-purple shade of plum, was highly valuable because the dye used to make it could only be derived from the very rare Bolinus brandaris sea snail. Furthermore, purple of various shades are often associated with the occult, spiritual fulfilment and enlightenment, vitality, and even the mysterious third eye.

All that being said, the meaning of purple varies, depending on where you're located in the world. For example, the enlightenment aspect of purple is at least partly due to the fact that the highest-ranked monks in Japan wear purple robes. And in Brazil and Thailand, purple is associated with mourning and grief.

We offer all kinds of purple dream catchers for sale on our website. One good example is the Purple Feather Large Dreamcatcher, which features feathers of both purple (naturally) and indigo. The several hoops of this dreamcatcher—there are five in total—feature spiderweb-like flowers in shades of pink, dark purple, and dark blue. This dreamcatcher can also be compared to the Purple Flower Dreamcatcher, which features a dark, rich shade of purple, not unlike the Tyrian shade we were talking about before. This dreamcatcher also offers many thick, luxurious feathers, a hoop-web design that resembles the creations that come from a Spirograph set, and large white beads that frame the feathers. It is roughly 45 to 50 centimetres tall-large enough to place on your wall and form a lovely point of interest for wandering eyes.

If you like that shade of purple, a similar shade of purple is offered in the Purple Wind Chimes Dream Catcher, although this dark shade has fewer trace elements of red. It features two hoops, with the larger one stacked on top of the smaller one, and countless feathers in black and the said dark shade of purple. It also features a great many black charms, which are placed on the web of this dreamcatcher’s hoop. The black beads add a unique touch that is not seen in many other dreamcatchers you might see for sale, including the other models available on this website. Finally, as you might imagine from the name, this dreamcatcher doubles a chime—perfect for placing outside your home, such as on the balcony or the door, when you want to experience the joy and music attached to a beautiful, blustery day.

Finally, the other purple dreamcatcher we offer is the Heart Shaped Dreamcatcher, which is available in different colors in addition to purple. For example, it can be purchased in pink, teal, white, or pink. As for the purple model, this one features electric violet, a sharp, vibrant color that is seen in both the feathers and the heart-shaped hoop of this dreamcatcher. All models are roughly 55 centimetres tall and feature that heart-shaped hoop, which itself is complete with spiky cord lines, perhaps representing the rays of the sun, that radiate outward from the centre.

Our dreamcatchers have neat designs which make them all the cooler. For instance, we already spoke about how one model doubles as wind chimes so that it can make your balcony or porch as musical as it is pretty. However, you'll also want to the different shapes of the dreamcatchers we have available. Not only do some of them have heart-shaped hoops, but others also have webs and cords that are decorated with beads and beautiful shapes, including flowers and circular patterns that resemble galaxies in space.

Other dreamcatchers are quite interesting in that they feature multiple hoops. After all, we tend to consider dreamcatchers as traditionally having one hoop only—generally a circular one, which is placed at the top of the whole structure. That being said, the dreamcatchers offered on our website have one or many hoops—as many as five in some cases, as for example with the Purple Feather Large Dreamcatcher—and even have hoops of different sizes. Together, this creates a beautiful image or impression of the whole dreamcatcher, lending it structure, form and balance that it might not otherwise have had.

How do I take into account the purple color meaning?

Purple is a color associated with calm and serenity, as well as royalty, luxury and power. For this reason, dreamcatchers in purple shades are a great choice for bedrooms, especially master bedrooms—to maximize on the power and luxury—and bathrooms, balconies and porches—to maximize on the relaxation aspects of the color. For this reason, they also make great housewarming and birthday gifts, since you want your friends and loved ones to know not only that they mean a lot to you, and are a calming presence in your own life, but also that they radiate their own special kind of strength and power. A smaller purple dream catcher is also a wonderful choice for placing in cars or in a child’s bedroom.

What other colours go well with the purple dream catcher?

The colour purple has so many meanings that purple decorative items will work well with other items and wall colors in other shades. As such, dark purple, plum, dusky rose, and lavender are all highly compatible with both each other and with the colour white. A bright purple can be colourful with other vibrant colors in warm shades—think orange and red, in addition to the classic black—and a very dark purple can go well with shades associated with desert landscapes, including pale yellow, medium and dark orange, and the Camelot shade of red, as seen in the lupine flower.