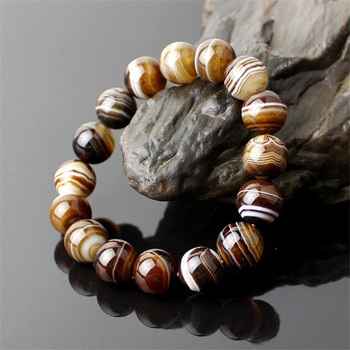 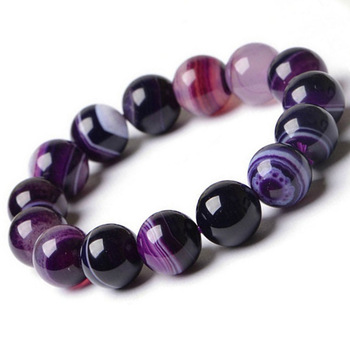 Its name, similarly, combines sard (referencing the ancient Persian city, Sardis, in present-day Turkey, where the red stone was found) with onyx (from the Greek word of the same spelling, which meant “nail or claw.”)

Sard ranges in color from yellowish red to reddish brown, depending on how much iron oxide is present. Sard is easily confused with carnelian, another type of chalcedony that is slightly softer and lighter in color.

Sardonyx, like onyx, shows layers of parallel bands—instead of the chaotic, curved bands that compose agate, another type of chalcedony.

The finest examples of sardonyx display sharp contrasts between layers and are found in India. Other sources include Brazil, Germany, Czech Republic, Slovakia, Madagascar, Uruguay and the United States.

Measuring 6.5 on the Mohs hardness scale, sardonyx is widely available and relatively inexpensive as gems, beads, and jewelry. It is often carved into cameos, intaglios, and brooches to show the color contrast between layers.

Used as a gemstone of strength and protection in ancient times, sardonyx is associated with courage, happiness and clear communication. Ancients believed that placing a sardonyx gemstone at each corner of a house will grant protection against evil.

Sardonyx has been popular for centuries, dating back to the Second Dynasty of Egypt more than 4,000 years ago.

Ancient Greeks and Romans went to battle wearing sardonyx gemstone talismans engraved with images of heroes and gods like Hercules and Mars. They believed the stone could harness the bravery of those figures, granting them courage, victory, and protection on the battlefield.

Sardonyx was a popular gemstone for Roman seals and signet rings that were used to imprint wax emblems on official documents, due to the fact that hot wax doesn’t stick to this gemstone.

During Renaissance times, sardonyx was associated with eloquence. Public speakers and orators wore it to aid clear thinking and communication.

Unlike rare gemstones that were historically limited to wealthy royals, sardonyx has been popular with elite and regular folk alike. Relatively common and inexpensive, sardonyx is a beautiful gemstone that’s affordable enough to join any collection.

Sardonyx makes a great gift for people born in August who want something a little different than the traditional peridot birthstone. Readily available and relatively inexpensive, sardonyx makes an affordable addition to anyone’s collection.

The quality factors of sardonyx are not as clearly defined as other gemstones like diamonds, but generally the 4Cs still apply. Ask an American Gem Society jeweler for help selecting the best gemstones.

The most attractive sardonyx shows a high contrast between reddish layers of sard stone and white bands of onyx. It may be translucent or opaque, seldom showing flaws or fractures.

Sardonyx is widely available and moderately priced in sizes up to 10 carats. The most common cut is cabochon, though it is popularly carved into cameos, intaglios, inlays, and brooches to emphasize the contrast between layers.

Artificial and imitation sardonyx have been produced from common chalcedony and plain agate as far back as Roman times, according to writings from first-century naturalist, Pliny. Some gemstones are also stained with iron oxide pigment or treated with nitric acid to enhance color.

These enhancements make gemstones less valuable than natural sardonyx, so watch for imitations when buying these gemstones. A certified American Gem Society Jeweler can help you select a genuine sardonyx stone.