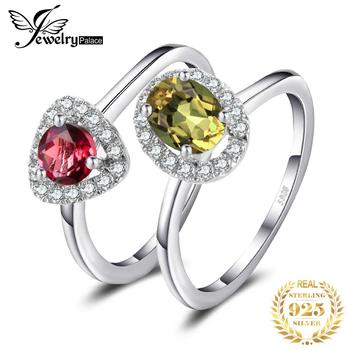 The name "tourmaline" comes from the Sinhalese words tura mali, which mean "stone of mixed colors." As its name implies, tourmaline stands apart from other gemstones with its broad spectrum of colors in every shade of the rainbow.

Tourmaline is not one mineral, but a fairly complex group of minerals with different chemical compositions and physical properties. Certain trace elements produce distinct colors, and many resulting varieties have their own names:

Black tourmaline, known as “schorl” is rich in iron, which causes dark shades from deep brown to bluish-black. This variety makes up 95 percent of all tourmaline, though most of it isn’t gemstone-quality.

Dravite or brown tourmaline is rich in magnesium, which causes colors ranging from brown to yellow. It’s named for the Drave District of Carinthina (now Slovenia) where it’s found.

Elbaite offers the widest range of gem-quality tourmaline colors, due to lithium traces combined with other coloring elements.

Rubellite or red tourmaline is caused by manganese, but if the color becomes less vibrant under different light sources, it may be called pink tourmaline.

Indicolite or blue tourmaline can appear purplish blue or bluish green, depending on the amount of iron and titanium.

Verdelite or green tourmaline can resemble emerald, but if its color is caused by chrome and vanadium, it’s called a chrome tourmaline.

Paraíba tourmaline is a vividly colored purplish or greenish blue variety found in Paraíba, Brazil. It’s the most recently discovered, and because of its desirably intense colors, it’s one of the most valuable. The element copper is what is responsible for its vivid colors. Copper-bearing tourmaline is also found in other parts of the world such as Mozambique and Nigeria, but only copper-bearing tourmaline from Paraíba, Brazil is called “Paraíba tourmaline.”

Achroite or colorless tourmaline is rare.

Parti-colored tourmaline displays more than one color, due to chemical fluctuations during crystallization. A common color combination is green and pink. These are often cut in slices to reveal a red center surrounded by a green rim, earning the name “watermelon tourmaline.”

Tourmaline is desirable because of its sheer range of color options. Combined with a good hardness of 7 to 7.5 on the Mohs scale, tourmaline makes very wearable jewelry.

One of this gemstone’s most impressive traits is its ability to become electrically charged through heat (pyroelectricity) and through pressure (piezoelectricity). When charged, tourmaline can act as a magnet by oscillating, and by attracting or repelling particles of dust.

Ancient magicians used black tourmaline as a talisman to protect against negative energy and evil forces. Today, many still believe that it can shield against radiation, pollutants, toxins, and negative thoughts.

Egyptian legend tells that tourmaline found its famed array of colors when, on its journey up from the Earth’s center, it passed through a rainbow. Because of its colorful occurrences, tourmaline has been confused with other gemstones throughout history.

In the 1500s, a Spanish conquistador found green tourmaline in Brazil—which he mistook for emerald. His error held until the 1800s, when mineralogists finally identified tourmaline as its own mineral species.

Variations of the name “schorl” may have been used to describe black tourmaline even before 1400. The name comes from a village in Saxony, Germany, (now called Zschorlau) near a mine with black tourmaline deposits.

The Dutch East India Company brought Sri Lankan tourmaline to Europe for centuries before traders realized it was the same mineral as schorl.

American tourmaline deposits caused the gemstone’s spike in popularity. In 1876, mineralogist George Kunz launched a craze when he sold green tourmaline from Maine to Tiffany & Co.

In the early 1890s, tourmaline was reported in California—where Native Americans had, for centuries, given certain colors of the gemstone as funeral gifts.

At that point, China represented the biggest market for tourmaline. The Chinese Empress Dowager Cixi was particularly fond of pink tourmaline, and she purchased large quantities of it from deposits in San Diego County.

The Chinese market was so critical to tourmaline, in fact, that when the Chinese government collapsed in 1912, it took tourmaline trade down with it.

Brazilian tourmaline discoveries in the 1980s and 90s reignited interest in this gemstone, because material mined in Paraíba displayed such striking neon greens, radiant blues, and vivid violets. This region has produced the world’s finest, most valuable specimens of tourmaline—including the world’s largest, weighing 191.87 carats.

While plenty of tourmaline is mined around the world, it’s rare to find fine gem-quality tourmaline in bright colors. This range of material means that the price of tourmaline can vary almost as much as the color.

No two tourmaline gemstones are exactly alike, which makes this a one-of-a-kind gift for any individual—especially someone celebrating an October birthday or an eighth wedding anniversary.

With a wide variety of colors, qualities, and sources available, there’s tourmaline to suit a range of styles and budgets. Like diamonds, tourmaline is evaluated by the criteria of: color, clarity, cut, and carat weight.

In general, darker toned tourmaline that appears black is priced lower than brightly colored material. Rubellite tourmaline, in shades of pink or red, is one of this gemstone’s most desirable colors. Green and blue tourmaline are also popular, though the most striking shades of these colors come from Brazil’s exotic and rare Paraíba tourmaline. Prices can run $10,000 per carat, making this the most valuable variety of tourmaline.

Inclusions are common in tourmaline, because liquid inclusions and crystals can get trapped during formation. It’s not uncommon for red or pink tourmaline to display visible inclusions, but inclusions can lower the value of other colors, depending on their visual impact.

Some tourmaline material, especially rubellite, undergoes heat treatment to improve color. Other tourmaline is clarity-enhanced to remove inclusions, which can significantly lower the value.

Tourmalines tend to absorb light differently down the length of a crystal, versus than across it. This optical property is called “pleochroism,” which means they appear different colors from different directions—so the cut is critical.

Tourmaline can come in a range of sizes, but Paraíba tourmaline is rare in sizes larger than one carat. But with these stones, color is more highly valued than size, so a small, brightly colored gemstone is preferred over a large, dark one.

With such a wide range of tourmaline options available—from the common, inexpensive schorl to the highly-valued Paraíba—the price of these gemstones can vary greatly.